​In these few months before the International Symposium Museology and Values, Art and Human Dignity in the 21st century, we are glad to introduce the guests who are attending the conference.

It is possibile to still believe that museums can, through the way they display art, shape their visitors’ sense of the dignity of the person? Through the readings of history and style which they propose, can museums bridge the gap that today seems to separate present from past, isolating individuals and groups in a contemporaneity without roots? If so, how? If not, why?

Starting from these questions our keynote speakers, some of the directors, curators and professionists of the most important museums in the world, will tell us about their challenges and their solutions in communicating the meanings of today.

Michail Borisovich Piotrovskij was born in Yerevan in 1944. His father, Boris Borisovič Piotrovskij, an eminent archaeologist, was Director of The State Hermitage Museum from 1964 till 1990. In July 1992, Michail was appointed Director of the Museum by a decree of the Prime Minister.

Jean-Luc Martinez is a renowned archeologist and scholar. He was appointed President‐Director of the Louvre in April 2013. He leads several projects reflect the museum’s ambition for going out to its public, at a national level with the Louvre Lens and the construction of the new museum storage area in Liévin in Northern France as well, but also on an international scale, with the recent opening of the Louvre Abu Dhabi museum that aims to be the first universal museum of the 21st century.

Julien Chapuis, from 1997 until 2007, was curator of medieval art at the Metropolitan Museum in New York. Since 2008, he has been Deputy Director of the Bode-Museum in Berlin that, under his guidance, is facing the challenge of building a deep and lasting relationship between the museum and new generations.

Susanne Avery-Quash is Senior Research Curator at the National Gallery in London. She is in charge of the pre-1900 objects in the Gallery’s History Collection and is responsible for activities associated with the Gallery’s research strand “Buying, Collecting and Display” which focus on important private and public art collections, especially the National Gallery, trends in artistic taste and the historic art market.

Allen Quine served as a minister for over twenty years and was Dean at the Cairns University. Nowadays he is Vice President of the International Relations Department of the Museum of the Bible and also serves as general counsel for the museum and oversees new start-up ventures.

Eike D. Schmidt is an art historian, born in 1968 in Freiburg in Breisgau (Germany). He has worked and lived in Italy for a long time, especially in Florence, where from 1994 to 2001 he was scholar and researcher at the Deutsches Kunsthistorisches Institut. Internationally renowned as an expert in Florentine art, since November 2015, he has been the Director of the Gallerie degli Uffizi. 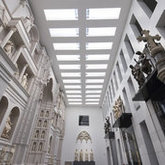