Every year millions of people from all over the world visit the monumental complexes of the Opera di Santa Maria del Fiore and the Franciscan Basilica of Santa Croce in Florence. These immense treasures of beauty and spirituality are like two friends who have crossed hand in hand through the history of Florence, sharing great seasons of art and culture since their origins.

Both the Cathedral and the Basilica of Santa Croce were founded at the end of the 13th century, at the height of the economic power of Florence and became two of the largest Christian temples in the world. Both were designed by the great Tuscan architect Arnolfo di Cambio - also author of the walls, the Government Palace and other important buildings - who conceived them with two different plans but with a common architectural style: impressive and sober at the same time, out of respect for the costumes of the municipal Florence.

The administrative structure of these institutions was also the same. Both Santa Maria del Fiore and Santa Croce are still today "Opere" or "Fabbricerie" which at the time of their foundation were composed of members of the two major Florentine guilds, whose representatives also formed the government of the city: the Opera of Santa Croce was administered by the members of the Art of Calimala, merchants and producers of silk, (such as the Baptistery of St. John), while the Opera of Santa Maria del Fiore by those of the Wool Guild.

It is no coincidence that these monumental complexes shared dozens of artists who adorned them with masterpieces: we have mentioned Arnolfo di Cambio, but we also remember Giotto, who was buried in Santa Maria del Fiore after having worked there as architect of the Bell Tower and of whom the marvelous wall paintings of the Bardi and Peruzzi chapels can still be admired today in Santa Croce.

About the 14th century we cannot do not remember Dante Alighieri: the great author of the Divine Comedy dreamed of receiving the laurel wreath in the Baptistery of Florence and one of his most famous portraits was painted in the 15th century by Domenico di Michelino and can be admired on the north wall of the Cathedral. Nonetheless in the 19th century his cenotaph was placed in Santa Croce and the sculpture with its monumental portrait was placed in the square in front of that basilica.

In the 15th century was planned to create a kind of Florentine "pantheon" in the Cathedral to celebrate the glories of the city, but this idea took place in Santa Croce in the following centuries.

In the same century we see the great protagonists of the early Renaissance working both in Santa Maria del Fiore and in Santa Croce. Brunelleschi, architect of the Cathedral Dome, built  in Santa Croce the Pazzi Chapel, which is one of his masterpieces. And his friend Donatello, who had trained and grew up carving countless masterpieces in the construction site of the Cathedral, sculpted for Santa Croce his famous Crucifix and the splendid Annunciation of the Cavalcanti Chapel. But what about Lorenzo Ghiberti? The author of the two monumental doors of the Baptistery was not buried in the Cathedral like his rival Brunelleschi, but his elegant earthen tomb is located in the Franciscan Basilica.

The case of Michelangelo's burial also represents a curious historical intertwining: the great artist, who died in Rome, was buried in Santa Croce, where Vasari and the other members of the Accademia del Disegno honored him with a splendid sepulcher, while his Pietà with his self-portrait, which the artist would have wanted to decorate his own burial in a Roman church, entered the treasury of the Cathedral in the following centuries and today can be admired in the Opera del Duomo Museum.

Few people know that when the monumental marble choir built in the 16th century by Baccio Bandinelli was partially dismantled, the gigantic sculptures that adorned the altar, depicting God the Father and the Deposition of Christ, were transferred to Santa Croce. You can admire the first just outside the Pazzi Chapel and the second – wich is splendid - in the crypt.

During the 19th century these interlacements intensified: the Pelli Monument was removed from the Cathedral and it was transferred to the Franciscan basilica and similarly happened for the ancient wooden doors of the facade of the Cathedral, which were donated to Santa Croce. Indeed, you can see the Saints Zenobius and Reparata and the coat of arms of the Opera di Santa Maria del Fiore carved into the doors of its main portal. Have you ever noticed it?

And broadening your gaze you will see that the façade of Santa Maria del Fiore and that of Santa Croce are very similar. Both are masterpieces of the Florentine neo-Gothic architecture built in the time of united Italy: one on a project by De Fabris and the the other by Niccolò Matas. The two are adorned with marble artworks made by the major sculptors of the Academy of Florence, so to seal an ancient brotherhood of seven centuries.

Thanks to the collaboration between these two Fabbricerie, you will be able to visit the Baptistery, the Opera del Duomo Museum and the monumental complex of Santa Croce with a single ticket at a reduced price. This great promo is available until the end of the year! 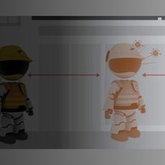 A device to measure the distance between visitors. The Opera del Duomo is the first institution to use it in the museum environment.