When you think about our monuments and the infinite works of art that embellish them you think of beauty, spiritual peace, harmony and ideal perfection ... But a careful observer and a refined connoisseur know that among our treasures there are also bizarre figures and monsters, grotesque characters and other oddities of various eras and craftsmanship.

In the 19th-century facade of the Cathedral there are two figures fairly known to the Florentines. In the bronze right portal, created by Giuseppe Cassioli in 1898, the artist portrayed himself in one of the reliefs, with a shocked face and the neck strangled by an entwined snake. It is an ironic but very bitter lamentation by the artist for the countless vicissitudes and suffering that this important commission entailed him. 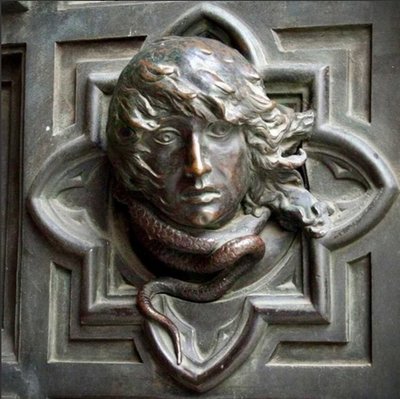 Just few centimeters away, in the marble frame of the same portal, an angel in relief makes an irreverent gesture with his arm that always provokes hilarity among the visitors. He is one of the eight rebel angels, i.e. Demons, sculpted by Emilio Gallori and Cesare Zocchi in 1880's, which are in contrast to the six victorious angels carved into the tympanum. Countless theories and stories tell about this figure that actually was not conceived as comic or vulgar: the angels allied to Lucifer fall defending themselves with expressions of anguish. 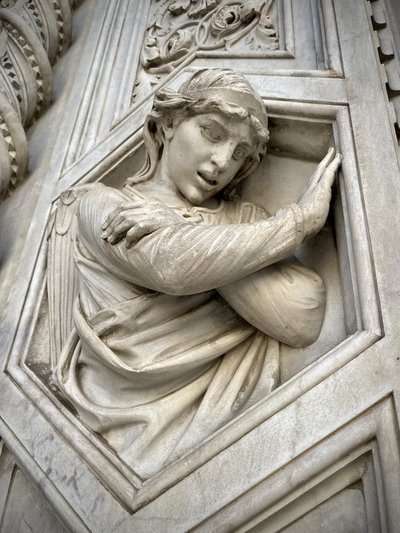 Continuing the walk around the Cathedral, if you look up you can count eleven marble gargoyles (the twelfth is in the Museum room called “Lapidarium”). They depict caricatured heads, zoomorphic monsters and animals: you can recognize the heads of a dog, a bovine (many bizarre legends have arisen about this "cow" or "bull", some of which are "spicy"), three lions, a wolf, a sea monster, three screaming men of a strange hominid with tonsure and a laughing child – now in the Museum -. 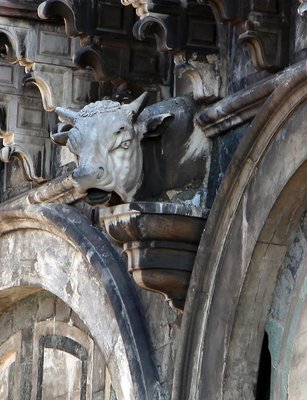 They were sculpted between the 15th and 16th centuries and their function is to protect the building from atmospheric agents - from their mouths they let the corrosive rainwater flow outwards - and to repel the evil spirits that try to enter the sacred space (the correct term would be “apotropaic” function). Today these exhaust vents are off for conservative reasons and no one believes anymore that they guard against invisible vicious forces, but they still have an absolute artistic value. 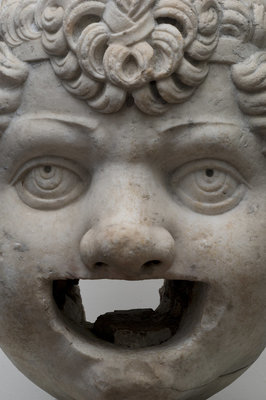 Let us now see the oddities that we find in the Baptistery. In in the corners on the external part of the apse there are two bizarre figures sculpted in sandstone. They depict two human faces, two masks, surmounted by lions. These are works by Romanesque artisans and their symbolic meaning is rather complex. For our contemporary taste, they make us a little smile, because of their simplified shapes and the strange pose of the felines on the heads.

We conclude our short “oddities” tour at a short distance: in the frames of the Gate of Paradise and the North gate and in the shutters around the quadrilobes of the latter. Lorenzo Ghiberti has modeled with extraordinary realism a great variety of animals and plants: squirrels, birds, lizards and ... an endless encyclopedia of insects! It is difficult to explain what these little animals are doing next to the reliefs depicting sacred stories, but more interesting is the reaction of those who look at them: between the attraction for the wonder of art and the sense of repulsion for the subject. 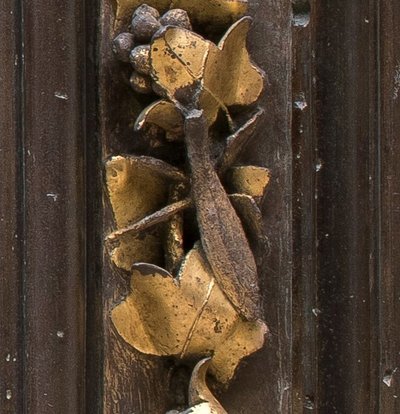