The Paradise of the patron saints of Florence

Piazza del Duomo is the navel of Florentine religiosity and here are honored the major patron saints of the city: sacred buildings and altars are reserved for them and they are the protagonists of countless works of art in the Opera treasure.

Looking at our collections, the devotion to Mary, mother of the Savior, queen of all saints and protector of Florence, stands out above all. In the fourteenth century, the new Cathedral was dedicated to her with the title of "Santa Maria del Fiore", where the floral attribute recalls both the lily of the coat of arms and the name of Florence, and is a poetic and theological reference to Christ “blooming" in her belly. The stories of the Madonna and her "Flower", including the famous "Madonna of the glass eyes", were sculpted in marble by Arnolfo di Cambio at the beginning of the fourteenth century to adorn the three portals of the ancient facade of the Cathedral. In the same period, Gaddo Gaddi made the mosaic of the coronation of Mary in the counter-façade. Five hundred years later, in the new neo-Gothic facade, Mary and the Savior were again chosen as the subject of the new iconographic program of the sculptural decoration of the architectural front, decorated by the hand of the most excellent Florentine sculptors of the period. 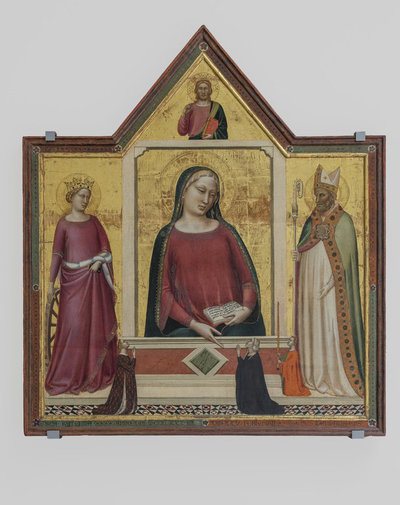 Over the five centuries that separate the two facades, and even earlier if we consider the thirteenth-century mosaics of the Baptistery, the image of the Virgin Mary was interpreted countless times by the artists who worked for the Opera construction site. Mary with the Child Jesus is at the centre of the Polyptych of Santa Reparata by Giotto and workshop and returns in many altarpieces by his descendants, including the splendid Madonna del Parto by Bernardo Daddi (now in the Museum) and the very sweet Madonna "del solletico" by Andrea Pisano sculpted for the Campanile. In the works of the Renaissance the subject of the Virgin is omnipresent and we find it in capital works of art, such as the nine stained glass windows of the Cathedral (the one on the counter-façade and the eight on the drum), designed by the major artists of the fifteenth century, or the great tympanum of the Almond Door by Nanni di Banco and Donatello. In addition, worthy of mention is the splendid marble of the Annunciation by Giovanni d'Ambrogio, now in the Museum, dated to the early fifteenth century. Brunelleschi's dome itself has the shape of Mary's pregnant belly rising towards the sky. In the sixteenth century, Vasari and Federico Zuccari painted a gigantic Madonna next to Christ the judge, in the eastern section of the Last Judgment painted inside the dome, and in the nineteenth century the southern chapel of the Cathedral was dedicated to the Immaculate Conception of Mary and a splendid tabernacle in silver and gold was placed on the altar.

If the Cathedral is dedicated to Mary, the Baptistery, three centuries older, is dedicated to Saint John the Baptist, last of the prophets and first of the saints, patron saint of Florence, whose effigy stood out on one face of the florin, the coin minted in Florence in the 13th century. The Madonna and Child on one side and the Baptist on the other, seated on heavenly benches, look at each other from the sides of the arch of the Baptistery's apse. The figure of St. John, with the appearance of a hermit dressed in camel skin and red cloak, recurs in many of the works commissioned, especially for the temple dedicated to him. His stories shine in the lower register (the largest and most visible) of the late thirteenth-century mosaics of the vault and in the gilded bronze panels of the South Door of the temple made by Andrea Pisano (1330-36). Inside the Baptistery, the life of the Baptist recurred in the reliefs of the great silver antependium of the altar (a important work of several generations of late Gothic and Renaissance artists), as well as in the silk and gold embroidery of the liturgical vests designed by Antonio Pollaiolo, a masterpiece of 15th century textile art. 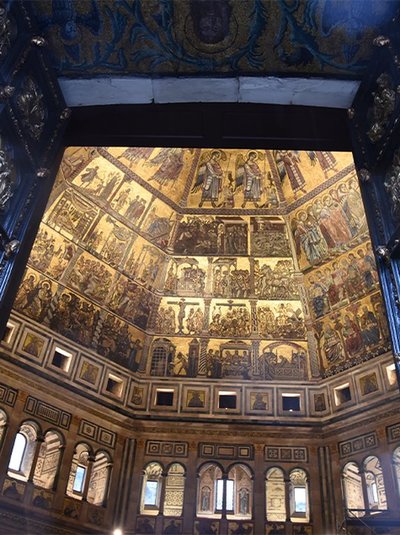 In the 16th century, three large sculptural groups dedicated to San Giovanni were commissioned to decorate the over doors of the Baptistery: the Preaching by Giovan Francesco Rustici, the Baptism by Andrea Sansovino and the Beheading by Vincenzo Danti. Finally, the Opera del Duomo Museum and the Cathedral house many relics of the Baptist inside splendid reliquaries, made between the fourteenth and nineteenth centuries.

However, if we go back in time to the buildings of Piazza del Duomo, we find the name of another saint: Reparata, to whom the ancient cathedral was dedicated and whose archaeological remains can be visited in the basement of the Cathedral. Reparata was a Palestinian virgin martyr who lived in the 4th century. With a vase in her hands and veiled, her figure flanked the Majesty by  Arnolfo in the main lunette of the medieval facade of the Cathedral and, in the neo-Gothic front of the late nineteenth century, Amalia Duprè depicted her sadly holding the palm of her martyrdom in her arms. In the Museum, there are three other representations of Reparata represented with heroic pride: a small and precious marble by the hand of Andrea Pisano and two paintings of the fourteenth century. But, why was a Middle Eastern saint venerated in Florence? The reason for her cult is linked to a legend that allows us to introduce the fourth saint of our story: San Zenobius, disciple of Sant’Ambrogio and first bishop of Florence in the 4th-5th century. At the time of his episcopate, Florence found itself threatened by the barbarian hordes of Radagaiso, and it is said that it was through the intercession of St. Reparata, invoked by Zenobius, that the allied Roman troops led by Stilicho won and saved Florence. Thus, we find Zenobius portrayed in a mirror image in Reparata on the other side of the throne of the Madonna with glass eyes by Arnolfo and, again, in the right frame of the main portal of the nineteenth-century facade. Zenobius and some episodes of his legend are depicted in a dossal now in the Museum. It is one of the oldest and most venerated works of our collection. Its wood, according to the legend, would be that of the elm miraculously flowered during the transfer of his remains from San Lorenzo Basilica to the Duomo in the 9th century, where a column dedicated to him is now located. 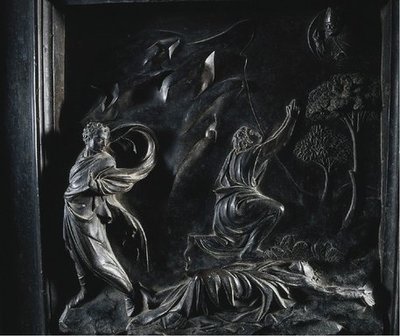 Those miraculous remains of Zenobius were placed, in the fifteenth century, in a bronze reliquary urn, which is a masterpiece by Lorenzo Ghiberti situated under the altar of the chapel dedicated to this holy bishop, in the eastern tribune of the Cathedral. Still dozens of times we recognize Zenobius in the ancient works of art of our Complex. We see him flanked by his deacons as he tramples on Pride and Cruelty in the large altarpiece by Giovanni del Biondo in the Cathedral (1380), or flanked by two angels in a lunette by Andrea della Robbia, coming from the ancient seat of the lay Company named after him. Finally, a great portrait of him is the one modelled at the end of the sixteenth century by Pietro Francavilla for the ephemeral decorations of the wedding of the Grand Duke Ferdinando I, now preserved in the north-west tribune of the Cathedral. In that environment, next to this statue, there are others depicting other saints dear to Florentine devotion. We will talk about them in the next episode of our journey ...