History, analysis and meanings of eight masterpieces of light from the Florentine Renaissance

In the space below the Dome of the Cathedral, the sunrays fall tinged with colour and filtered by eight painted circular windows, which like eight eyes pierce the stone of the drum walls joining the light of the sky to the interior space. These eight stained glass windows were made between 1434 and 1445 by great glass masters based on designs by the major artists of the Florentine Renaissance (Donatello, Ghiberti, Andrea del Castagno and Paolo Uccello). Of almost 5 meters in diameter they depict stories of Mary and Christ and complete the cycle of 44 stained glass windows of the Cathedral (depicting saints and characters from the Old Testament), painted between the end of the fourteenth century and the first half of the fifteenth century by the most important Florentine painters.

In 1434, the vault of the dome was almost completed and the need felt to decorate the oculi of the drum. The first stained glass window to be commissioned was the one facing east with the Coronation of Mary, which is the most visible from the aisles and celebrates the holders of the Cathedral. Ghiberti and Donatello were asked to make a 1:1 size test cartoon, which was placed in the oculus to observe its effect. Donatello won and for the first time introduced the use of linear perspective in a stained glass window: the throne of the Virgin marks the depth of the space and the figures seem to move back from the frame, which is no longer just a decorative element but gives the illusion of to be an shortened with seraphs and cherubs. 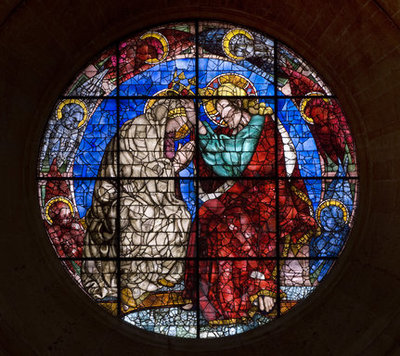 After this competition, Ghiberti found himself, in 1443, having to overcome a contest for the commission of the stained glass window depicting the Ascension of Christ. This time the rival was the master painter of perspective par excellence: Paolo Uccello, fresh from the success of the fresco with the equestrian monument of Giovanni Acuto in the Cathedral. Ghiberti prevailed and was entrusted with this stained glass window and those of the Presentation of Jesus in the Temple and the Prayer in the garden. 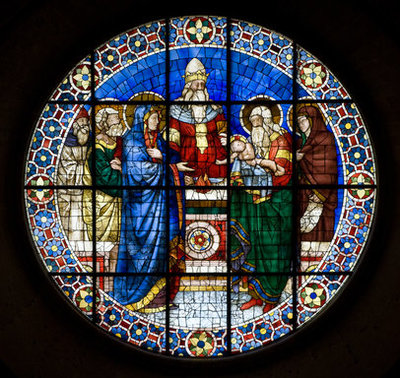 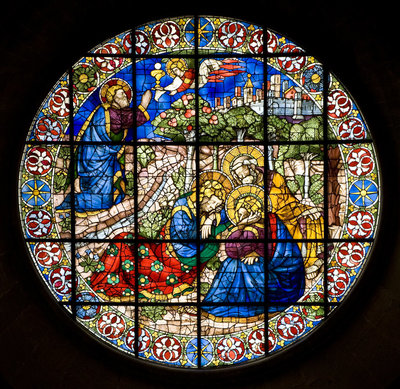 These three were the last stained glass windows designed by the master, who had signed 33 for the Cathedral. The great goldsmith and sculptor had worked on these works for almost 40 years, evolving as an artist while, at the same time, he modelled and cast the doors of the Baptistery. As a young man, around 1405-15, he had designed the three circular windows of the counter-façade - including the largest, that of the rose window, depicting the Assumption of the Madonna - and twenty years later those of the presbyterial chapels.

In these last stained glass windows for the drum, Ghiberti combined in his style the meticulous elegance of the late Gothic of his youth with the innovations of Donatello and Brunelleschi learned in previous decades. In his Ascension, we see Christ rising between the apostles in a circle and his figure stands out in a blue background that becomes more intense towards the centre to give the effect of an enlarged space towards the bottom. In the Oration in the Garden Ghiberti gave shape to an irrational representation of the scene where the distances and proportional relationships between the figures and the landscape dissolve. Christ praying, the angel who descends and the sleeping apostles look like giants set in a tiny theatrical scenography painted with lot of detail: trees, houses, streams...

Still different stylistically is the stained glass window with the Presentation of Jesus in the temple, which is much more harmonious and clear both in the arrangement of the elements and in the poses of the characters. We see the Holy Family, Simeon and the other protagonists of this Gospel episode, arranged in symmetrical pairs around the altar and the priest.

The cartoon proposed by Paolo Uccello in 1443 must in any case have impressed those responsible for the Opera del Duomo because between 1443 and 1444 he was commissioned to design the stained glass windows of three other oculi: the one with the Resurrection of Christ, the one with the Nativity and the one with the Annunciation. 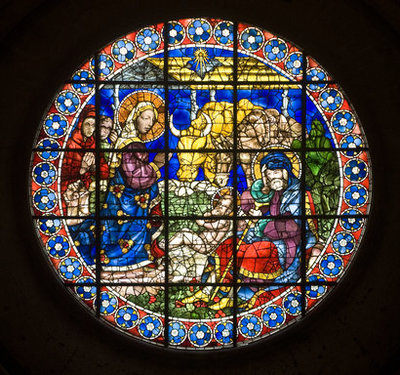 His windows are distinguished by the presence of geometric solids put in perspective and by the dreamy atmosphere of the stories. In the Resurrection, everything takes place in an indefinite space, inside which Christ resurrects covered by a floral robe, rising above the foreshortened sepulchre, while on the sides, the soldiers placed on a picket, sleep in their armour made of spheres and cylinders. The Nativity has been greatly altered over the centuries by inaccurate restorations, but by Paolo Uccello we recognize the beautiful jutting out of the snouts of the ox and the donkey and the invention of the hut made of rough wooden beams, placed in perfect geometric perspective. The Annunciation was located in the oculus facing west and is the only window that has been entirely lost, destroyed by lightning in 1828. The Opera di Santa Maria del Fiore at the time announced a competition for the construction of a new stained glass window depicting the same subject in Renaissance style. Ulisse Forni, a famous restorer from Siena, won but for various reasons it was never carried out. The beautiful preparatory drawings are still preserved in the warehouses of the Opera di Santa Maria del Fiore. 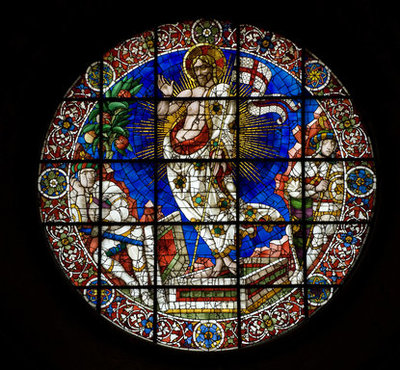 Finally, the eighth stained glass window, depicting the Lamentation over Christ taken down from the Cross, was made in 1444 based on a design by another artist: Andrea del Castagno, who ten years later would have frescoed the equestrian monument to Niccolò da Tolentino in the left aisle. A. del Castagno gave shape to a very clear representation of the scene in the orderly arrangement of the figures around the base of the cross but also dramatic in the glimpses of the desperate faces and in the twisted pose of the dead body of Christ. 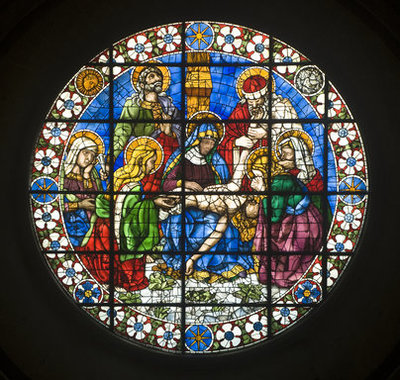 Although there were four hands who worked on it at different times, the cycle of stained glass windows is homogeneous. Almost certainly, one or more scholars of the time had drawn up an iconographic program for all the windows from the beginning before the individual commissions were entrusted. Have you noticed that the arrangement of the episodes does not respect the chronological order of the story? The choice of the episodes is also particular and aims to celebrate both the figure of Mary and that of Jesus. A logic based on the theological meanings of the stories was probably followed and particular correspondences were studied in the arrangement of the scenes.

To the east, for example, there is the Coronation of Mary, so that the splendour of the sun at dawn sets the image of the Virgin alight when she is welcomed into the glory of Heaven. Furthermore, this representation is aligned with the large rose window in the counter-façade, where Ghiberti thirty years earlier had depicted an almost identical subject: the Assumption of the Madonna, which lights up at sunset. In this way, the two celebratory stained glass windows of the Mother of God ideally open and close the body of the Cathedral, which is dedicated to her.

The Birth of Christ, that is, the beginning of Jesus' life as a man (north-west) is mirroring his Ascension (south-east), that is, his return to Heaven. Moreover, the episodes of the Oration of the Garden (in the southern wall) and of the Deposition from the Cross-(in the northern one) are one in front of the other. These are dominated by the theme of pain and death.

Incredible that there was this attention to the meanings of the works! It should be borne in mind that just the priests who were in the choir enclosure saw the entire circle of stained glass and that they had the theological preparation to notice and understand these meanings.

Today's scholars have the task of deepening the reading of the works, while we enjoy the beauty of these gigantic iridescent circles.