How many "faces" has the Cathedral of Florence had?

Brief history of the facade of Santa Maria del Fiore, from its origins to the present day

The facade of an ancient building is kind of like a person's face: it is the public and representative part that qualifies it on the outside. The Cathedral of Florence has changed its “face” three times throught its six centuries history!

At the end of the 13th century the sculptor and architect Arnolfo di Cambio began to build the new Cathedral starting from the facade and while he was raising it he had he overlaid it with colored mosaics and loggias, niches and galleries, inside which were placed statues depicting the stories of the Virgin Mary, Holy martyrs, Church fathers and angels. It looked like a sort of large curtain opened onto the space of the open yard behind it. This sculptural decoration, begun by Arnolfo himself and his workshop, was then continued by other sculptors during the 14th century until the early Renaissance, when Donatello, Nanni di Banco, Ciuffagni and Lamberti created the Four evangelists for the niches on the both sides of the main portal. This luxurious "dress", however, remained unfinished at about a third of its height. When in the second half of the 15th century the Brunelleschi's Dome was completed, an attempt was made to reopen the question on the complete the front elevation of the Duomo, without success.

In 1587, the Grand Duke Francesco I de 'Medici decided to demolish the unfinished medieval decoration and commissioned his friend and trusted architect Bernardo Buontalenti the construction of a new one updated to the "mannerist" taste of the time. The medieval marbles were detached, many decorative and architectural elements were destroyed, dozens of statues were dispersed among private villas and gardens, others were kept in the deposits of the Opera and in the Cathedral.

The destruction was not followed up by a reconstruction and the discussions on this topic continued for a century, three Grand Dukes tried to revive the project and many artists made projects to give a respectable ornament to this important place of the city, but none were realized. A memory of it remains in a room of the Museum where 7 wooden models, one drawing and one painting are preserved, made by important artists of the 17th century: in addition to the aforementioned Buontalenti’s one we find projects by Giovan Antonio Dosio, Giambologna, Baccio del Bianco, Cigoli, Gherardo Silvani and others. In 1689, on the occasion of the wedding of his son Ferdinando the Grand Duke Cosimo III commissioned to paint the front with an ephemeral architecture. This large wall painting survived until the 19th century and Its remains are still visible in the first photographs of the Cathedral.

It twill take until the 19th a century to hear about the façade again: the debate around the enterprise rekindled in the early 20s of the 19th century and in the 40s (also as a reaction to the construction of the neo-Gothic façade of the nearby basilica of Santa Croce) funding began to be sought through the creation of the "Association for the façade of the Duomo". Toward the middle of the century, interest in the issue went beyond the regional boundaries, but the turbulence of the Risorgimento motions slowed down its realization. Then, in 1858 it was born a new association that launched a first competition, international this time, and in 1860 the King of Italy Vittorio Emanuele laid the foundation stone of the facade of the cathedral of the (temporary) capital of the new kingdom. Architectural fantasies were now all conformed to the neo-Gothic style, which evoked the glorious time of the Middle Ages of the free Italian communes (with ideological meaning of celebrating the Italian unity and freedom from the foreign "yoke").

But the affair was not yet over. Between 1861 and 1865 three other competitions were announced. In 1867 the Deputation finally chose the project by the architect Emilio De Fabris, who was given official charge. However, De Fabris was not exempt from criticism and a final aftermath of controversy concerned the crown of the front: with three cusps or with a gallery. The second version, called "basilical", was choose by a citizen referendum. De Fabris was helped by the philosopher Augusto Conti for the sculptural decoration: Conti elaborated an iconographic program focused on the Virgin mary and on the Florentine genius. Dozens of sculptures and reliefs were made by the best Florentine sculptors of the time. Just six months after De Fabris's death, on December 5th, 1883, the facade was presented to the Florentines and on May 12th of the following year it was officially inaugurated.

Today, almost a century and a half later, tourists from all over the world admire its imposing and rich decoration and do not notice that it is the most recent part of the whole complex: the marbles and shapes have been chosen with great philological attention so as to preserve the harmonious unity of the monumental ensemble.

Our technicians, however, know well that the marbles of the façade are more fragile than the ancient ones that cover the other parts of the Cathedral and the most ruined sculptures of the façade are gradually replaced by copies made by our stonemasons. The originals are moved in the Museum ... a short distance from their "ancestors" of the Arnolfo facade. Yes, because starting from the opening of the Museum in 1891, the fragments of the first medieval decoration were gradually reunited there and in 2015 the surviving architectonical elements and sculptures were set up inside the main hall of the Museum in a spectacular evocative replica of the ancient façade in 1: 1 scale. 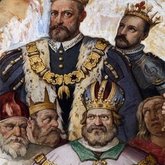 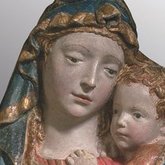