Great captains of war and great masterpieces in Florence Cathedral

The other side of beauty: not only saints and angels but also cruel warriors

When you enter the Florence Cathedral and immerse yourself in the beauty of this medieval architecture adorned with sublime paintings and sculptures, you imagine the Middle Ages and the Renaissance as times of peace, characterized by the flourishing of the arts philosophical studies and trades. But the historical truth is more complex. The reality is suggested to us by the two imposing soldiers dominating the left aisle of the Cathedral with their war horses, armors and command batons. These are the funerary monuments of the mercenary captains Niccolò da Tolentino and John Hawkwood: art masterpieces in fresco by Andrea del Castagno and Paolo Uccello, inspired by the ancient Roman equestrian monuments of emperors and generals. On the counter-façade, until the 19th century, there were also the sarcophagus and the portrait statue of an other commander: Piero del Farnese.

What are these soldiers doing in a sacred place?

They testify that Florence lived for centuries in a persistent state of armed conflict: civil wars, wars of defense or of conquest with neighboring cities and states were commonplace. The armies confronting each other in these bloody battles were not like those of today: knights and infantry were not professional soldiers and they were often joined by groups of ferocious mercenaries. Moreover, they were led not by loyal generals but professional leaders, Italians or foreigners, who entered the service of this or that state for money and land. The fame of these warriors went hand in hand with the ferocity of their exploits: not only military victories but also terrible sieges, looting and raids difficult to control even by their own "patrons".

The very rich city of Florence had the opportunity to make use of some of the best professional of war, such as Niccolò da Tolentino, John Hawkwood or Piero del Farnese, and awarded them for their services with the honor of impressive funeral monuments in the Cathedral. It should not be forgotten that the Cathedral also had a civil role and the space of the naves was a sort of illustrious Florentines pantheon: artists, philosophers and… warriors.

Let’s meet these brave soldiers closely by looking at the masterpieces given them.

On the counter façade was the tomb of Piero del Farnese (now in the Museum). Piero was captain of the Papal army and general of the Florentine troops in the 14th century. At the head of infantrymen and knights on 7 May 1363 he defeated the Pisan troops near Bagno a Vena and returned to Florence acclaimed as a hero: he was given the insignia of the city and his title was renewed. He died of the plague the same year. Solemn funerals were given to him and an ancient Roman sarcophagus was reused as his burial. The arms of the states to which he had served were carved on it and a wooden sculpture depicting him on horseback was placed above it, it is said to be the work of Jacopo di Cione (now lost).

Commissioned by the city government in 1436 Paolo Uccello painted a sarcophagus surmounted by the equestrian portrait of the English commander John Hawkwood, Italianized in “Giovanni Acuto”, on the wall of the left aisle. This commander had been faithfully in the service of Florence for decades in the 14th century, also acquiring a certain political influence. Despite the fame of his extraordinary ferocity (the saying “Italianate English, incarnate devil” derives from him) on his death, in 1394, he was celebrated in the Cathedral with splendid funerals and with the gigantic mural painting.

In the same time Paolo was painting the Acuto another commander died: Niccolò Maruzi da Tolentino. Andrea del Castagno dedicated to him in 1456 the companion fresco of Paolo Uccello’s one, from which he took the invention and the dimensions but depicting the knight and the sarcophagus in white marble on a porphyry background, instead of bronze. Nicolò da Tolentino was a son of a professional soldier and had spent his entire life fighting. The highest point of his fame was reached when he led the Florentine army to the victory against the Sienese in the famous battle of San Romano, near Pisa.

It is hard for us moderns to understand why these figures are placed next to the images of the Apostles or of the Virgin Mary, but this was not the case for our ancestors. For them these men of arms had defended their homeland as did the saints from Heaven, and even if there was no certainty that their souls deserved eternity in Heaven, the great art allowed their fame to survive for centuries until today. 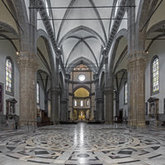