On Easter Sunday 26th april 1478 a terrible blood event took place in the Cathedral of Florence which threatened the freedom of Florence ...

The “Pazzi conspiracy” is one of the most heinous and famous bloody events in the history of Italy and took place in the Cathedral of Florence on April 26th, 1478.

Florence was at the time one of the richest and most powerful cities in Italy; the culture and the shops of artists and artisans were flourishing. Thanks to the economic benefits of bankers and merchants came to life, the great monuments and artworks by Leonardo, Verrocchio, Botticelli and Ghirlandaio. Florence was a Republic, but its political power was held by the Medici family, whose leaders were Lorenzo (known as “the Magnificent”) and his younger brother Giuliano.

The primacy of the Medici’s Florence aroused soon both internal and external envy and jealousy and thus, took shape the idea of the bloody conspiracy, that was in fact an attempted coup d’etat. The puppeteer of the operation was Pope Sixtus IV Della Rovere, who wanted to oust the Medici to make his nephew Girolamo Riario lord of Florence. The pontiff found as allies the nearby rival states of Florence: the Republic of Siena, the Kingdom of Naples, the Duchies of Ferrara and Montefeltro. Within the city walls, Jacopo and Francesco, members of the Pazzi family, powerful bankers, participated in the conspiracy, joined by the archbishop of Pisa Francesco Salviati.

The place and time choosen for the assassination of the two Medici brothers even more have stained with impiety the evil plan: the Holy Easter Sunday mass, in the Cathedral, in the presence of all the citizens, and at the holiest moment of the liturgy, at the elevation of the consecrated Host.

When everyone knelt down and bowed their heads, Bernardo Bandini and Francesco de’Pazzi backstabbed respectively Giuliano and his brother Lorenzo. Giuliano immediately fell under the Bandini’s dagger strokes; instead Lorenzo, only wounded, escaped. While Pazzi raged on the battered body of the first, Bandini pursued the other, but Francesco Nori intervened between them, and offered his life for his friend. Lorenzo fled to the Sacristy of the Masses helped by some companions, including Cavalcanti and the poet Luigi Pulci, who closed behind them the large bronze door by Luca della Robbia.

One of them, Bartolomeo della Stufa, climbing up the internal staircase on Luca della Robbia's Singers Gallery, observed the Giuliano's dead body and communicated to the others when the right occasion to escape out. Meanwhile, the conspirators tried to raise the people against the Medici faction to the cry of “Freedom! Freedom!"; but they had not reckoned on the true sentiment of the Florentines ... The people did not follow the killers, and rather attacked them and began a real manhunt. Killed by the crowd or sentenced to death by the government, all the conspirators lost their lives and their names were damned from the memory of the city. Thus, Florence did not lose its freedom, on the contrary, began its most prosperous historical period, remembered as the golden age of Lorenzo the Magnificent. 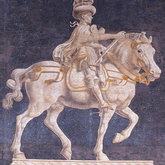 Great captains of war and great masterpieces in Florence Cathedral