Every Easter Sunday, in Piazza del Duomo, takes place the event of the Explosion of the wagon event

The Explosion of the Wagon (or Cart) is one of the most important and beloved Florentine feast, which combines history, tradition and faith. It is a great religious feastival that takes place on Easter Sunday, but which also linked to feelings and elements of civic celebration of the City of Florence and its people.

Its origin is lost in the mists of time and in legend and it hides symbolic meanings linked to the Christian Easter that are object of historians’ study still still today.

According to ancient chronicles, everything originated a thousand years ago, at the time of the Crusades, when Florence was regaining its glory after the dark ness of the Middle Ages under the protection of Matilde di Canossa. It was 1099 when the Crusader army of Godfrey of Bouillon conquered Jerusalem; with him there were over 2,500 Florentines, led by Pazzino de 'Pazzi, who, according to tradition, raised for first the christian flag on the city walls.

In gratitude for this, Goffredo would have given three Holy Sepulcher stone’s fragments to Pazzino. The stones were brought to Florence and first kept in the Palazzo Pazzi, then in the churches of Santa Maria Sopra Porta, San Biagio and then of the Santissimi Apostoli, where they still are today. Again, according to tradition, on Holy Saturday after the liberation of the city, the Crusaders were gathered in prayer in the church of the Resurrection and distributed the Holy fire that burned there with torches and candles. To commemorate this event, starting from the end of the 12th century, also in Florence began the practice of celebrating Holy Saturday lighting the Holy fire with the sparkles generated rubbing the three Holy Sepulcher stones. The fire is blessed in the Cathedral and then distributed to the Florentines who used to bring it back to their homes to light the fireside.

Subsequently, the custom began to transport the Holy fire inside a splendid Renaissance silver lantern, and to take it into the Cathedral on a chariot. Over the centuries the chariot was enriched with various decorations, including torches and then rockets and fireworks. The current charriot - called by the Florentines the “brindellone” - was designed at the beginning of the 17th century by the great architect, theater designer and pyrotechnic effects producer Bernardo Buontalenti. It is a large three-storey wooden tower which, after centuries, although restored several times, is in excellent condition.

Starting from 1515-20, under pope Leo X (Giovanni de 'Medici), the traditional "explosion of the cart" began on Easter day with the same forms today. The cart is escorted by 150 armed men, musicians and flag-wavers of historical football and pulled by two pairs of white oxen ornated with flowers, and it is placed in the space in front of the churchyard, between the Duomo and the Baptistery. In front of the main altar of the cathedral, a 7-meter pole is raised and it is connected with a steel cable to the cart. On the steel cable near the pole there is a dove-shaped rocket (the so-called “colombina”). During the Mass, at the singing of the Gloria, the Colombina is set on fire and it hisses quickly along the cable, runs through the entire nave, crosses the main door, reaches the cart in the square giving life to the spectacular fireworks’ show. The fires are made up of rockets, firecrackers, pinwheels and fountains of light, arranged around and along the three floors of the wagon; they light up in a crescendo from the bottom up.

It is a good omen that the dove, after having set the chariot on fire, makes it back to the main Altar. The dove symbolizes the Holy Spirit and the fire that lights up the Resurrection of Jesus from the Sepulcher: it is therefore easy to understand why the success of the flight of the dove and the lighting of the fires have always been considered a good omen for the coming year (which in the past began in Florence on March 25th).

Today as then, when the rocket-dove returns to the altar, a loud applause rises from the church. The ceremony is preceded by the traditional procession, a costume parade and the religious celebration in the Baptistery.

And to underline the indestructible link between the religious and civic celebrations, we must also remember that at the moment of the “explosion” a pinwheel placed on the top of the cart unfold three banners: one with the emblem of the Opera di Santa Maria del Fiore, one with Pazzi family’s one (in memory of the famous Pazzino) and a third with the lily of Florence.

Florentines "feel" this event still today with particular pride and devotion, but in nowaday the feast also attracts the attention of many tourists and has become famous throughout the world, both for its spectacularity and for the beauty of its setting.

The appointment with the explosion of the wagon is on Easter Sunday at 11am in the Cathedral churchyard.

Finally, after two years of pandemic, the event will take place with the public. 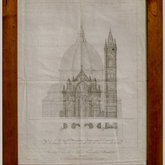