Back to the 1300 the guild in charge of the preservation of the Baptistery was the so called Calimala Guild. In the sixties of the 1300 such Guild decided to replace the existing silver altar, which was built in the 1200 and then placed in the Major Altar of the Baptistery, with a new, more precious one. Then is when the story of our Treasure began.

The Treasure was commissioned in 1366; the task of building it would have been assigned to the winner of a competition. However, the various reliefs happened to be assigned to a range of participants. Famous sculptors and goldsmiths such as Leonardo di ser Giovanni, Michele di Monte, Tommaso Ghiberti , Matteo di Giovanni, Bernardo Cennini, Antonio del Pollaiolo e Andrea del Verrocchio were challenged in the creation of the masterpiece. The Treasure required more than a 100 years of work, as well as more than 400kg of silver and 1050 enamelled plates. The result of such an effort is an extraordinary synthesis of the main trends of the florentine goldsmithing and sculpture that flourished between the Gothic and the Renaissance.

The Treasure decorated the front side of the Major Altar until the end of the 1300, then it was moved to decorate the movable altar placed in the center of the Baptistery. On that movable altar the Treasure was showed to the worshippers twice a year, precisely on the 13 th of January (the celebration of Christ’s Baptism) and on the 24th of June (the celebration of Saint John, patron of Florence). In 1441 the central niche was realised in order to host the statue of the Baptist, which was a work by Michelozzo di Bartolomeo. In 1477 the decision to turn the Treasure into an independent altar was taken.

The frequent assemblies and reshuffles which took place during the centuries have altered the original order of the reliefs and some parts have been damaged or even lost. The very first great restoration was achieved by the Opificio delle Pietre Dure in 2012, after 6 years of works. During those years the masterpiece was disassembled into more than 1500 pieces and underwent a meticulous cleaning.

Today, this unique goldsmithing example is preserved in the Treasury Room of the Opera Duomo Museum, inside a showcase that keeps the object under nitrogen, assuring the ideal humidity and temperature. 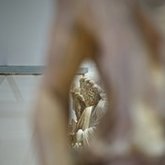 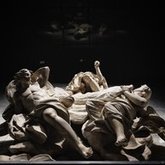 An evening at the Opera Duomo Museum