A great masterpiece from a Renaissance master depicting another female saint has been recently restored, and now it makes a fine show in the completely restyled ​Grande Museo del Duomo: the Penitent Magdalene by Donatello.

As the Florence Cathedral is dedicated to the Virgin Mary, the mother of Jesus appears in many artworks of the Cathedral and of its museum as well.

Of course Mary is not the only female character in the huge iconographic heritage of the Duomo.

A great masterpiece from a Renaissance master depicting another female saint has been recently restored, and now it makes a fine show in the completely restyled Grande Museo del Duomo: the Penitent Magdalene by Donatello.

The Penitent Magdalene: a revolutionary masterpiece

The Penitent Magdalene was carved by Donatello (Donato di Niccolò di Betto Bardi, known as Donatello, c. 1386 - 1466) between 1453 and 1455. It was probably commissioned for the Baptistery of Florence (San Giovanni’s baptistery was at the time a separate entity the Cathedral).

The Florentine audience reacted to The Penitent Magdalene with great astonishment, as it was an unprecedented work of veristic naturalism aesthetics.

The Penitent Magdalene represents the watershed between the young Donatello and the mature one, the brilliant and modern reaction to the crisis of his relationship with the canon of classicism. The Magdalene is a Renaissance masterwork indeed, but in a very peculiar way.

The raw material of the statue: neither stone nor marble, but wood (white poplar).

At first sight the Donatello’s decision could seem a conservative - not a revolutionary - one: wood doesn’t allow the shades and soft passages that the “back to classic” wave requires, so not surprise that, while wood had been in vogue in the Middle Ages, its use became increasingly rare in the Renaissance way.

But Donatello had a very clear idea on why wood was the better material for this work: to deal in the best way with a poignant, touching theme; to grasp the dramatic nature of asceticism through the mortification of the flesh.

As perfectly described by Giorgio Vasari in his “Vite”, Donatello’s skills let the Magdalene to become a true body, emphasizing the feelings of that body as well.

The story of Donatello’s Penitent Magdalene

The first record of the presence of the statue in the Baptistery dates to 1550.

Then The Magdalene was moved several times, it was badly damaged by the 1966 flood and it is part of the Grande Museo del Duomo since 1972.

The Maddalena has now its own hall in the new museum. 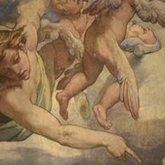