Do you really want to know more about the Florence Cathedral? And about Florence in The Renaissance? Well: ask whom was there, “in the making”! This post is an “interview” to Giorgio Vasari, the “father of art history”, a friend of Michelangelo and part of the Florentine arts establishment.

Do you really want to know more about the Florence Cathedral? And about Florence in The Renaissance?

Well: ask whom was there, “in the making”!

This post is an “interview” to Giorgio Vasari (1511 - 1574), the “father of art history”, a friend of Michelangelo and part of the Florentine arts establishment.

How did we make it?

We just used Vasari’s book: Le Vite de' più eccellenti pittori, scultori, ed architettori (Lives of the Most Eminent Painters, Sculptors, and Architects): his “best seller” (the book had two editions, just at the dawn of the printing press in Florence!).

Giorgio Vasari was an excellent storyteller (sometimes too much a good one, with a not scientific approach), so it has been easy to adapt it into an interview.

And here it is our questions for Vasari about the Florence Cathedral and the Opera di Santa Maria del Fiore masterpieces.

Giotto and the Campanile

Everybody knows Giotto as a painter. But how did he get involved as an architect in the building of the Campanile, the bell tower named after him “Campanile di Giotto”?

Giotto was a master painter: he sketched the Saint John Baptist’s stories for the bronze door of the Baptistery by Andrea Pisano. But he could prove his architectural skills when Arnolfo Todesco (Arnolfo the German - Arnolfo di Cambio) passed away.

Arnolfo was in charge of the project of the Campanile (the bell tower) for Santa Maria del Fiore (Saint Mary of the Flower, the Florence Cathedral) when he died.

Then Giotto designed a bell tower in the “German” (Gothic) style, and all the stories which adorn it (but the attribution to Giotto of the hexagonal panels bas - reliefs is uncertain).

But Giotto as well died before he could complete the work: what happened next about the Campanile?

Taddeo Gaddi - Giotto’s most talented pupil - continued the works (actually Giotto was succeeded as Master of the Works by Andrea Pisano. Andrea continued to use the Giotto’s project for the Campanile).

If the Campanile is the last medieval artwork in Piazza del Duomo, what about the Brunelleschi’s Dome - the Cupola del Brunelleschi, the greatest achievement of the Florentine Renaissance?

With Filippo Brunelleschi architecture goes back to the magnitude and proportions set by the ancients for columns and pillars. The Dome of Santa Maria del Fiore is magnificent and absolutely well-proportioned: it brings the artworks of the ancients to even a higher level in size and height.

The Brunelleschi’s Cupola has something of a miracle! 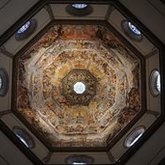