​The design and making of the Brunelleschi’s Baptistery North Door replica demonstrates that the Artworkshop of Opera di Santa Maria del Fiore still has the passion, the skills and the manpower to let the Renaissance be still alive in Florence.

The design and making of the Brunelleschi’s Baptistery North Door replica demonstrates that the Artworkshop of Opera di Santa Maria del Fiore still has the passion, the skills and the manpower to let the Renaissance be still alive in Florence.

A momentous challenge: that is the project to replicate Ghiberti’s North Door.

Six months of research and planning, four years of work, fifteen full - time workers who spent three hundred and fifty hours for the chiseling of the twenty - eighth panels.

Not to mention the employed materials: three and half tons of bronze, fifteen tons of refractory material, almost half ton of wax for the moulds of the panels and of the friezes. These are the “ingredients” of the replica which is five meters high and three meters wide.

You could think that anyway it should be easier to manage such a huge effort with current tools and technologies: but the Artworkshop of Opera di Santa Maria del Fiore used for the replica the Renaissance skills and techniques.

And you must be a very good at chiseling to chisel bronze - hard enough to be used in the making of cannons - as if it were gold, in the Brunelleschi's way!

The North Door (the “real one”…) is the milestone representing the beginning of the Renaissance in Florence. Ghiberti worked on it with his father Bartoluccio, goldsmith, and what we can define a pool of experts (just like a pool of experts had worked on the replica in the XXI Century) between 1402 and 1424.

The original North Door makes now a fine show of itself at the Opera Museum. The replica has been placed on the Baptistery last January 23rd in presence of the President of Opera di Santa Maria del Fiore Franco Lucchesi, the mayor of Florence Dario Nardella, the Cardinal Giuseppe Betori and the President of the Guild of the Dome Association Enrico Marinelli. 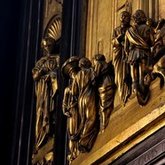 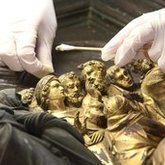 The Northern door of the Baptistery