When Michelangelo saw Lorenzo Ghiberti’s bronze doors for the Baptistery in Florence, he called them the Gates of Paradise.

While Brunelleschi’s dome was in the works, the Baptistery’s third and final doors were being commissioned just a few meters away. This task was given to Lorenzo Ghiberti since he was already an expert with the completion of the second doors. Even though Ghiberti was supported by numerous collaborators such as Donatello, Michelozzo, Luca della Robbia, Benozzo Gozzoli, Bernardo Cennini, it still took him 27 years to complete this bronze and gold early Renaissance masterpiece.

These final doors were so magnificent, it was quickly decided they were to take place of honor, facing the Duomo. According to Vasari it was Michelangelo that named these doors, since he saw both golden doors and said: “these are so beautiful that they should be the Gates of Paradise”.

The Gates of Paradise are 5.20 meters tall, 3.10 meters wide, 11 centimeters thick, weigh 8 tons and depict some stories from the Old Testament. Unlike the other baptistery doors that have 28 quatrefoil gothic panels, the Gates of Paradise don’t include the quatrefoil and reduce its story scenes to 10. Each panel gathers more episodes which are set in a bigger space, thus giving life to the depicted reliefs that are amongst the biggest masterpieces of the new Florentine pictorial language of the fifteenth century.

The Gates of Paradise never left their original location up until 1943, when World War II was happening, they were removed for security purposes. The doors then returned back to the Baptistery in 1948 after a restoration that brought its golden color back that had been buried for centuries under filth and a black paint that was put on it around 1772.

The Gates of Paradise inside the new Museum

It is always a pity having to remove a piece of art from its historic location to then imprison it inside of a museum, even though sometimes this is the only way to be able to preserve it for generations to come. In 2012, after a long restoration that lasted 27 years, the Gates of Paradise were placed in the Opera Museum’s old building, which kept them more distant to their original “Paradisiac” context, which was known as the space between the Duomo and the Baptistery.

In the New Opera Duomo Museum the problem of taking the artwork pieces out of their context doesn’t exist. It actually commemorates the original places intended for these works of art. The Paradise Room, that is 44 meters long, and more than 20 meters for both height and width, will in fact accommodate the reconstruction of Santa Maria del Fiore’s first façade that was never finished and dismantled in 1587. 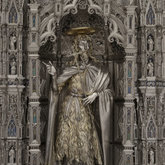 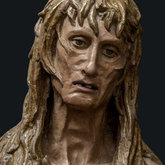