Filippo Brunelleschi was given the admirable task that is a never seen before work of art that is able to leave anyone speechless.

The dome’s construction was the last thing to be made on Santa Maria del Fiore, founded in 1296, designed by Arnolfo di Cambio. It is said that Arnolfo had the dome’s project already, that was to complete the top of the church but not all historians agree on this theory. In 1357 there was a resolution that describes the new Santa Maria del Fiore as a 95 meter long cathedral with three naves and having a 36 meter wide dome.

After ten years, in 1367, a group of experts got together and made a proper architectural project of the octagonal dome, which established its 45.5 meter diameter. The project was approved, but since it didn’t give any details of what construction techniques were to be used for a structure with that kind of dimension, the Opera of Santa Maria del Fiore started to finance studies and researching designs and models.

In the following years there were two competitions that came to an end on April 16th, 1420, which decided that Filippo Brunelleschi, Lorenzo Ghiberti and Battista d’Antonio would be in charge of the dome’s construction.

After preparing, organizing, and getting the materials ready for the worksite, on August 7th, 1420 the worksite was officially inaugurated with a ‘cholezione’ banquet in honor of the master artists of that time that were to work on the structure until 1436. This is how Filippo Brunelleschi’s great work began, one that was able to count on the experience and ability of the Opera of Santa Maria del Fiore.

If seen close up, or from the narrow medieval streets of the city center, or from the hills surrounding Florence, the first immediate impression that the dome gives is that of magnificence and grandeur never seen before. One of the first to testify of this great masterpiece was Leon Battista Alberti and he said:

“Whoever so hard or so envious to not praise the architect Pippo, with a structure so great, rising above the skies, vast enough to cover the entire Tuscan population with its shadow, a great artist if I do judge well, as at these times it was almost incredible being able to do so, maybe it was not heard of or known by the ancients? 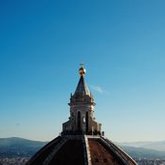 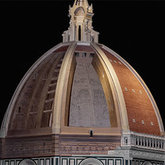