The counter-façade of the Cathedral is an immense stone surface decorated with colossal works of art from differentages.

One of these is the funerary monument of the bishop of Florence Antonio D'Orso, a fourteenth-century masterpiece in white marble by the Sienese master Tino di Camaino: a very original work for the time and almost one of its kind. The monument is located to the right of the central portal, a few meters above the ground and in its current form the monument is a hypothetical assemblage of surviving elements, to which two curtain-holding angels must be added, purchased by Opera di Santa Maria del Fiore in 2015 and now on display in the Museum (Naves’ Room). 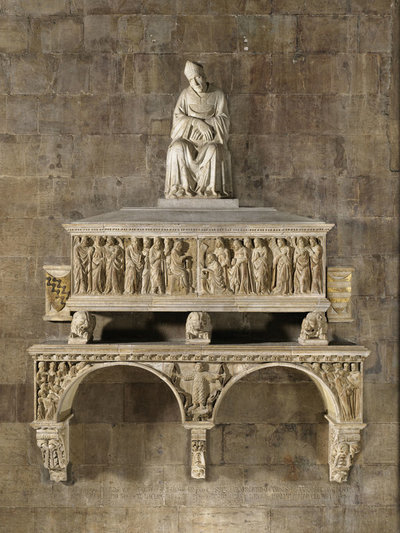 Antonio D'Orso, bishop of Florence from 1301 to his death in 1320, was buried in the sarcophagus on July 18th 1321 and probably its sepulchral monument have been completed around 1322. Various reconstructions of the monument have been attempted, but among many proposals is almost unanimous the opinion that once there was a canopy structure that enclosed the sarcophagus. In 1842 the architect Baccani moved it above the Porta della Mandorla, in the fourth span of the left aisle, and only in 1903, the architect Castellucci, having found the inscription by Tino di Camaino on the counter-façade, replaced it in its original position.

The funerary monument is made of three superimposed parts.

The lower part is a base defined by two arches and supported by three corbels; in the frontal part is carved a bas-relief with the allegory of death: it is depicted, in the center, in the form of an armored monster riding a dragon; she has lion's feet, three faces and four arms; with the two right hands and with the two on the left she stretches two bows, with which she shoots groups of figures at the both sides, among which nobles, kings and high prelates can be recognized, some already reduced to skeletons. Above, there is the sarcophagus, rectangular case shaped, supported by three lions and decorated on the front side by a bas-relief representing the personal judgment of the deceased, in the form of the "Commendatio animae": Antonio D'Orso is in the centre, facing on his knees Christ, who stands before him, enthroned, as judge. In fact, the prelate hands him a scroll, or the "Book of Life", on which his merits and his sins are listed. She introduces him as a lawyer, the Virgin, followed by the Holy women. Behind Christ, to help him in judging or perhaps to intercede, we recognize St. Peter with the keys and St. Paul with the sword (i.e. the princes of the Church of which the bishop was pastor) and the Baptist, protector of Florence, where D 'Orso had the bishop's chair. The scene is enclosed between two triplets of angels, while on the sides there are two funerary geniuses who cry on the coat of arms of the D'Orso family. We see two others coat-of-arms walled up on the sides: on the right that of Gaetani family, for reference to Pope Boniface VIII, under whose pontificate D'Orso became bishop, and on the left that of Clement V (Bertrand de Gout),in whose time Antonio D' Orso led much part of his own pastoral office. 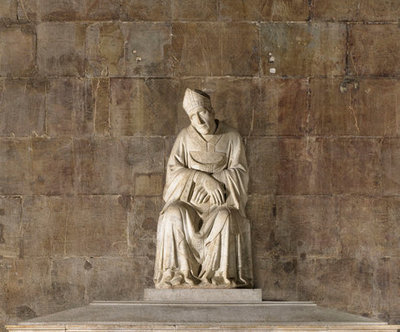 Finally, in the top part, the moving portrait of the deceased can be admired from below: still seated on his throne, in bishop's robes, with his arms crossed on his knees and his head bowed to the right; he has his eyes closed and a serene expression. His facial features are very characterized and emaciated and seem taken from a death mask.

These original iconographic subjects and the meanings that includes them in a unitary program were almost certainly elaborated by Francesco da Barberino: notary, poet and executor of bishop D'Orso's will. The three parts can be interpreted starting from the portrait of the bishop: the very singular invention of depicting him seated, rather than lying down, is absolutely innovative: it refers to the custom of displaying the body of deceased prelates in the cathedral and perhaps also recalls the tradition according to which the bishop would have died during the celebration of a pontifical. More deeply, on the theological level, the figure of the deceased who abandons himself to sleep has a meaning linked to hope in the resurrection, by reference to Christ's words in the evangelical episode of the resurrection of Jairus' daughter (Mark 5, 39): "Why this commotion and weeping? The child is not dead but asleep". The bishop's folded arms and his serene expression seem to allude to his faith in the salvation of his soul, that is, to the successful outcome of the sentence that Christ the judge will issue on the bas-relief of the sarcophagus; and also in the eschatological expectation, that is in the Final Judgment, in the resurrection and, therefore, in the victory over the terrible archer of the base.

Below, engraved in the wall of the counter-façade, an inscription celebrates the author of the monument: