The Paradise of the patron saints of Florence

We continue our journey to discover the saints dear to Florentine devotion through the great masterpieces of the Opera di Santa Maria del Fiore.

Let’s continue our topic from where we left it, that is from the north-west tribune of the Cathedral, called the "Hall of the bishops" because of the presence of six ephemeral sculptures depicting important saints of Florentine history. There are bishops and saints, made at the end of the sixteenth century by Pietro Tacca and other artists of his circle for the wedding of the Grand Duke Ferdinando I. We can start by looking at the statue depicting San Podius, the seventeenth bishop of Florence, who lived around the year 1000 and a friend of the Marquis Ugo di Toscana, whose remains are in an urn near that of San Zenobius, in the Cathedral. In the same room, next to him, we find a contemporary of his time, St. Giovanni Gualberto, from the noble Florentine Visdomini family. He was the founder of the Vallombrosian order and an important reformer of the Florentine clergy. Next to him, it stands the statue of St. Miniato, an Armenian king, who lived and was martyred in Florence at the end of the third century. He was also the first evangelizer of Roman Florentia. The splendid Benedictine basilica, built on the site of his burial in the hill of the city that bears his name, was built over time and in the form of the Baptistery of Florence, probably by the same group of artists, under the aegis of the Art of the silk merchants, called “di Calimala”. The Baptistery and the Basilica of San Miniato, with their white and green marble coverings, their mosaics and their oriental-style inlaid floors, seem to look at each other from a distance, one from the holy mountain of Florence and the other from its civil and religious center. . A beautiful bust of San Miniato stands out in a relief medallion on the nineteenth-century facade of the Cathedral. Continuing the identification of the statues of the dead tribune, we then recognize that of Sant’Andrea Corsini, who lived in the first half of the fourteenth century, a member of one of the most important Florentine families, and bishop of Fiesole. Why is a representative of the diocese of Fiesole in the Cathedral of Florence? According to the legend, Sant’Andrea appeared to help the Florentine troops on the battlefield of Anghiari (1440). 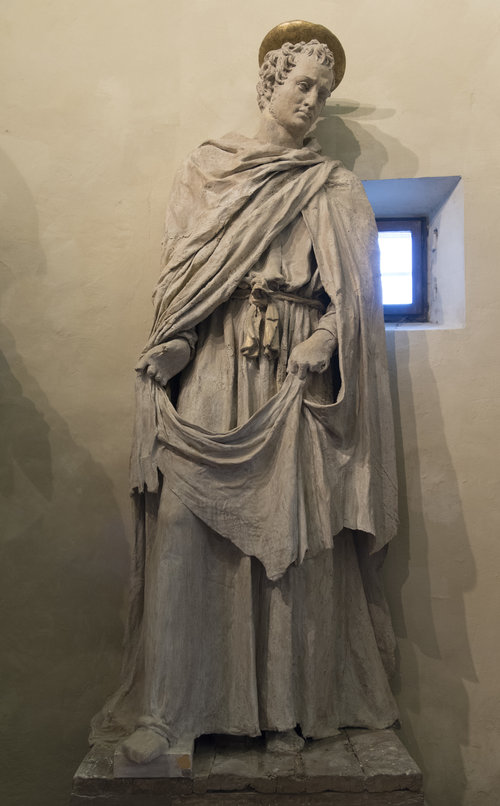 The group is closed by Sant’Antonino Pierozzi, who was bishop of Florence in the first half of the fifteenth century, in the full flourishing of humanism and the Renaissance. Friend of Cosimo the elder of Medici and in contact with many of the major artists of the time, Sant'Antonino, who was a Dominican, like Beato angelico, was a great theologian, a reformer of city customs and a very active pastor in the works of charity. His birthplace is few steps from the Cathedral and his face, handed down in memory of his funeral mask, is recognizable elsewhere: in the sixteenth century, Poppi depicted him blessing in the splendid altarpiece on the first right pillar of the Cathedral, and three centuries later, Antonio Bortone immortalized it in the southern niche of the facade, again blessing. 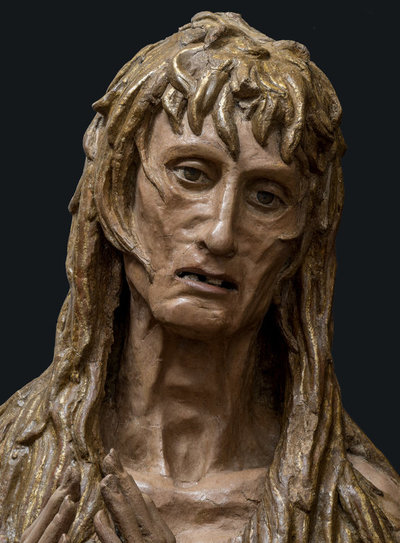 To conclude, we must reserve a place of honour for Saint Mary Magdalene, the evangelical figure that tradition has identified with the prostitute saved by Christ, to whom the Risen One appeared first and that the legend wanted to have concluded her days as a hermit and penitent. Her iconography, of a woman hollowed out and consumed by fasting and covered only with her own hair, had made her during the Middle Ages an ideal counterpart of the Baptist, who was also wandering in the desert in penance, dressed only in camel fur. For this reason, the spectacular penitent Magdalene, Donatello's late masterpiece, in painted wood and other materials, was until the last century housed in a wall niche in the Baptistery dedicated to St. John. Today, this timeless work is displayed in a room of the Museum, dedicated to all the Florentine female saints, to whom works of painting or sculpture were paid, such as Santa Reparata and Santa Caterina d’Alessandria. In this space, we find Magdalene also depicted in a glazed terracotta lunette attributed to Buglioni and in a moving bust by Bandini, which sees the saint proud and melancholy, with her eyes still red from tears.