How one of the most important genius in history has left traces of his creative mind: Leonardo da Vinci and his presence in the monumental complex of Piazza del Duomo

The artists who offered their talent to the construction and decoration of the monuments of the Opera di Santa Maria del Fiore were among the greatest of art history, especially in the golden age of Tuscan art, between the 13th and 16th centuries. It would be enough to mention Brunelleschi, Ghiberti, Donatello, Paolo Uccello, Andrea del Castagno, Pollaiolo, Verrocchio, Michelangelo, Jacopo Sansovino, Vasari. In this astonishing list of protagonists of that period later called “Renaissance”, we should add another excellent name: Leonardo da Vinci.

Leonardo is the great absentee on the marble wall of the corridor at the entrance of the Museum, where are celebrated those who worked for the Opera. In fact, his name does not appear in our archives, except on a case of which we will say later. Nevertheless, there is an important link between Leonardo and the Opera del Duomo, and it is recognizable in historical events and artworks of the Cathedral and the Baptistery.

First, we must remember that Leonardo was eclectic: he demonstrated his genius in the three major arts (painting, sculpture, architecture…), in mechanical, civil, military, robotic and hydraulic engineering (his inventions are famous and prophetic), as well as in the natural sciences (anatomy, physics zoology, botany, music and cuisine). Therefore, although Leonardo had maintained a relationship of love and hate with his Florence (he lived in Milan for long periods and then definitely moved to the court of France, where he died) thanks to his extraordinary versatility, he could leave his trace in the history of the Opera del Duomo Complex.

We know that Leonardo was in the workshop of Verrocchio (one of the most important in Florence) for about four years, (1469-74), and there he could acquire important knowledge of painting, sculpture, metallurgy and mechanical engineering.

In that period, he had the lucky opportunity to study the machines invented by Brunelleschi to raise the Dome: cranes, levers, screws, gears, weights and counterweights. He was in Verrocchio’s workshop when his master used those machines to set up the huge golden globe of the Dome of the Cathedral (1472). We still have a Leonardo's study drawings of the crane used to place the huge globe (in two sheets of the Codex Atlanticus) and the three-speed hoist (now at the Ambrosiana). Tangentially, in the Milan of the Sforza, Leonardo became the heir of Brunelleschi, also as designer of extraordinary theatrical machines. 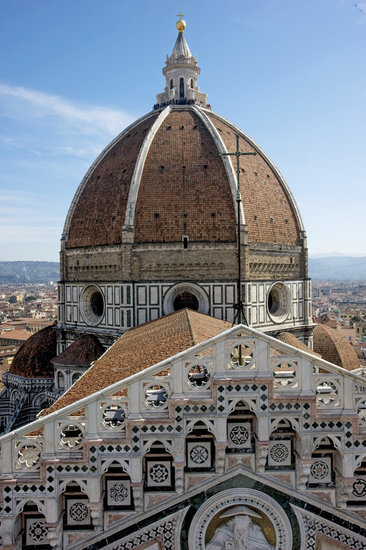 Strengthened by this engineering knowledge, Leonardo proposed an astonishing project for the Baptistery, never realized. He knew that in ancient times the Baptistery was on base with a staircase progressively swallowed up by the rise of the ground level. Vasari tells us that the genius from Vinci planned to reintroduce a base raised on four steps, raising the entire building with ropes and winches, and then to lay it on the new base when the work was completed!

Evidences of this project are in a drawing by Granacci (Dipartimento di Disegni e Stampe, Uffizi). This idea, apparently "crazy" and visionary also for our contemporary engineering, was perhaps inspired by the news that in the 15th century Aristotle Fioravanti had managed to move a tower in Bologna keeping it intact (he too using Brunelleschi's discoveries).

However, there is more about the relationship between Leonardo, Verrocchio and the Baptistery of Florence.

If Leonardo's paintings are famous, no sculpture attributable for certain to him, has come down to us but art historians proposed on a stylistic basis that Leonardo collaborated as independent artist with his old master on one preparatory terracotta for the panel depicting the Beheading of St. John the Baptist for the right side of the Silver Altar of Baptistery (now in the Museum). The scholars would attribute to him the figures of the young man with the tray and the man with the turban on the left. 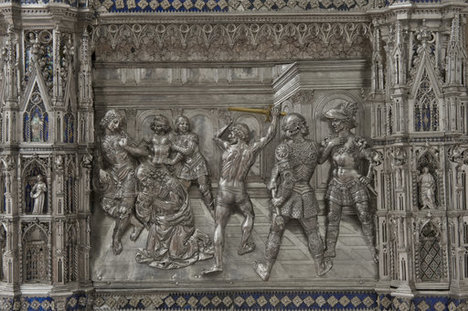 Some years later, in Florence, Leonardo befriended with a younger artist, also a pupil of Verrocchio, Giovan Francesco Rustici. This sculptor made the bronze group depicting The Preaching of the Baptist for the Baptistery in 1506-11. Vasari tells us that this important work (now in our Museum) conceived by Rustici was modelled and merged with Leonardo’s advice and help. For the period of this creation, they lived together in houses of the Martelli family:

"Giovan Francesco, while he was fashioning that work in clay, would have no one about him but Leonardo da Vinci, who, during the making of the moulds, the securing them with irons, and, in short, until the statues were cast, never left his side; wherefore some believe, but without knowing more than this, that Leonardo worked at them with his own hand, or at least assisted Giovan Francesco with his advice and good judgment"

It is impossible to say to what extend Leonardo participated in making these bronzes, but their excellent quality suggests that Vasari's account is reliable (and Giovan Francesco's terracottas inspired by Leonardo's Battle of Anghiari prove how close the two artists were). Leonardo had acquired great expertise in bronze casting, not only as a former pupil of Verrocchio, but also because at this time he was returning from his Milanese efforts to cast the gigantic equestrian monument to Francesco Sforza in bronze (never made).

We also know that Leonardo preferred terracotta and bronze sculpture and stylistically the group of the “Preaching” has a strong leonardesque chiaroscuro. The physiognomic research of the faces of the three characters has the strong expressive characterizations of Leonardo. The head of the bald Levite, for example, closely resembles some Leonardo’s caricatures and his preparatory studies for some of the apostles of his famous Last Supper. The grace and pose of the Baptist with the index finger of his right hand raised to the sky closely also recall his painting with the young Saint John, preserved in the Louvre Museum. 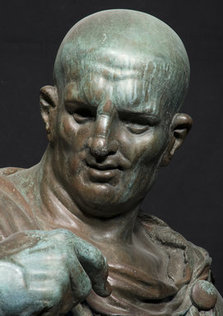 Finally, Leonardo's name appears in one of the most important documents preserved in the Historical Archive of the Opera del Duomo: on January 25th 1504, his name is among those of a commission of experts called to decide the location of Michelangelo’s David. This imposing marble by Buonarroti was commissioned by the Opera for one of the external buttresses of the Cathedral, but the exceptional beauty of the work made immediately think to an even more important location.

The document cites other great artists of the time together with Leonardo, called to decide the fate of the masterpiece: Andrea Della Robbia, Piero di Cosimo, Cosimo Rosselli, Sandro Botticelli, Pietro Perugino, Lorenzo di Credi, Giuliano and Antonio by Sangallo and others. Some of them proposed to place the giant in the square in front of the Cathedral, others in Piazza Signoria, next to the main door of Palazzo Vecchio (where it was finally placed). A third "party", led by Sangallo, considering the fragility of the marble of the statue, had instead suggested placing it in the Loggia dei Lanzi.

Leonardo joined the latter proposal and suggested placing it on the short side of the Loggia, inside a niche to avoid it disturbs public ceremonies. This was a solution that would have altered the perception of the formal values ​​of the masterpiece also relegating it to a secluded position. We know that Leonardo did not appreciate excessively powerful anatomy of the David, but a drawing by him depicting this sculpture, still testifies to the interest and the distance between the aesthetic ideal of the master from Vinci and that of the younger Buonarroti.

The more attentive observer will find Leonardo depicted in the top part of the Neo-Gothic facade of the Cathedral, in one of the nineteenth-century reliefs that adorn the gallery with portraits of the great geniuses of art. The preparatory plaster, by Fantacchiotti, is exhibited on the first floor of the Museum and reminds us that Leonardo also took part in the great history of the Opera di Santa Maria del Fiore.