At the end of 2018, the Opera di Santa Maria del Fiore decided to undertake the restoration of Mi-chelangelo's Pietà. This decision was immediately seconded by the American non-profit organization 'Friends of Florence', which offered to sustain the cost.

At the end of 2018, the Opera di Santa Maria del Fiore decided to undertake the restoration of Michelangelo's Pietà. This decision was immediately seconded by the American non-profit organization 'Friends of Florence', which offered to sustain the cost.

The restoration was careful and non-invasive, providing new information and matter for reflection on such difficult issues as the arrangement of the figures and the attitude of their limbs. The image of the Pietà that the restoration gives is no longer that of a marble group made chromatically uniform by old layers of various materials meant to create an impression of homogeneity, despite uneven treatment at different stages of work, from rough-hewn to almost finished. Now, rather, the more finished areas emerge with perfect clarity, making possible better-reasoned conjectures on authorship and style. This is the case, for example, of the lifeless body of Christ, which, in its ideal contours, attests to the passionate persistence of Michelangelo's interest in Hellenistic-style sculpture.

The artist who at the beginning of the 16th century, at about thirty years of age, painted the Tondo Doni in Florence using Hellenistic sculptural prototypes (the Apollo Belvedere, the Laocoon, the Belvedere Torso and others), continued - in Rome at mid-century, when he was in his seventies -, to turn to models characterized by the Hellenistic taste for pathos. This is precisely what he does in the body of Christ in our Pietà, drawing inspiration from a mutilated Hellenistic bust known as the ‘Gaddi Torso’,  much studied and often copied or evoked by 15th-century Florentine artists, beginning with Lorenzo Ghiberti, who quoted it in the nude Isaac figure of his presentation panel for the 1401 competition for the commission of the North Door of the Florentine Baptistery. 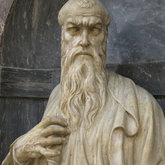 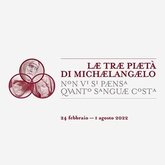