In the Cathedral of Florence, the summer solstice gives life to a light show that attracts dozens of spectators every year

In the week of June 21st, the summer solstice falls, that is, the sun reaches its maximum height in the sky at noon: an event full of charm and meaning since ancient times.

In the Florence Cathedral this astronomical date coincides with a light show that attracts dozens of spectators every year.

When the sun reaches this specific point of the sky, its rays, passing through the oculus of the dome, activates a wonderful scientific instrument from the Renaissance: a gnomon or, more precisly, the biggest gnomon in the world.

Let's see how it works: a bronze ring (called "bronzina"-“small bronze”), setted 90 meters height at the base of the lantern, is exactly centered by our star and projects a ray of its image on the North Tribune floor. The solar sharp image runs along a graduated line to reach a marble circle that has exactly the same circumference of it. When the solar disc and the marble disc overlap each other it means that is the astronomical noon or, rather, the Florentine noon (in fact, it changes depending on the latitude and longitude from which it is observed). In practice, the Dome works as an enormous camera obscura, of which the bronze is the lens and the floor is the film ... isn't it amazing to think that this instrument was built in 1475, six centuries ago? The genius who designed it is the Florentine Paolo dal Pozzo Toscanelli: mathematician, cartographer and astronomer. Paolo was also a friend and master of calculation of Filippo Brunelleschi and probably helped him in designing the difficult "cosmic" structure of the Dome.

What exactly was the gnomon for? It was useful for accurately calculate the astronomical year, of course, but also something more difficult: the distance of the Earth from the sun... and we are talking about an era in which telescopes did not yet exist!

But still, the adventure of our gnomon does not end here: three hundred years later, in 1754-57, another great Florentine astronomer, Leonardo Ximenes, restored it, perfected it and used it to demonstrate that the inclination of our planet changes over time.

Then, one hundred years later the bronzina was disassembled and the gnomon stopped working for about a decade. Fortunately, between 1865 and 1927 the astronomers of the Ximenian Observatory of Florence restored it and used it to make new observations, not astronomical this time, but on the stability of the Dome.

On ourday, because of the twentieth century scientific progress the gnomon lost its function as a measuring instrument. Since 1997, the seventh century anniversary of the Opera di Santa Maria del Fiore, the solstice show, an enchantment for adults and children, has become an occasion for celebrating. history of the Opera and of the brilliant minds that spreaded its glory over the centuries. 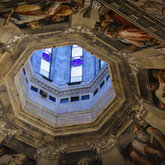 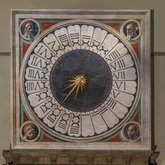