The opening of the Museum took place on May 3, 1891: since then its spaces have expanded and the works on display have multiplied to make it a world excellence.

The Museum of the Opera del Duomo in Florence has its natural seat in the rooms purchased at the beginning of the 15th century by the Opera del Duomo. This secular institution, created in 1296 to administer the construction of the cathedral and which then survived to take care of its conservation, chose these spaces for its offices, laboratories and warehouses, so that we can say that the works preserved here have, in many cases, returned to their place of origin. But the idea of ​​establishing a real museum was born much later. It was in the second half of the nineteenth century that the Opera began to worry about how to preserve, promote and enhance ancient objects of very notable artistic value that over the centuries had been accumulated disorderly in boxes or - at worst - had been dispersed in private collections and in other museums. For instance, in 1822, 37 works were alienated and transferred to the Royal Galleries.

The first to formulate the idea of ​​a museum of the Opera del Duomo was the archivist, Cesare Guasti, arround 1851. He wanted to give an adequate location to the ancient choirs of the Cathedral and to the other artefacts that were in boxes. In the 1970’s the Ministry granted the authorization to found the museum, but the project did not take off for various reasons.

In 1883, before the Cantorie di Donatello and Luca della Robbia were placed in the Bargello with a permanent exhibition project, the Secular Deputation of the Opera asked the Regie Gallerie to repossess it.

In 1885 the architect Luigi del Moro was entrusted with the task of designing the adaptation to museum spaces of some rooms used as storage, at no. 9 of Piazza Duomo. Del Moro gave these rooms an elegant neo-fifteenth-century appearance. The Ministry of Public Education, having examined the project, on 29 November 1886 gave its authorization and thus the Museum was born. These were the same years as the completion of the new façade of the Duomo, designed by De Fabris, which was inaugurated in May 1887. The opening of the Museum took place on May 3, 1891, with the intervention of high and distinguished personalities including S.A.R. the Duke of Aosta and the cav. Guido Carocci, Inspector of the Royal Commissariat of Fine Arts, who gave a speech in the Sala delle cantorie. On this occasion, the first inventory of the Museum's works of art was also drawn up and the first catalog was published. At the entrance, the visitor was greeted by the "glass-eyed" Madonna by Arnolfo di Cambio; continuing along the staircase, you could admire several stone fragments of the ancient facade and the sixteenth-century choir of the cathedral, while on the main floor the two choirs were faced on the wall, surrounded by seventeenth-century wooden models for the facade, the Altar and the Cross of the Baptistery and the Embroideries of the parade of San Giovanni by Pollaiolo. Beyond this central room, there was a second room where the collection of projects for the nineteenth-century facade was placed. In the following years, work was undertaken to recover other masterpieces from the monuments of the Opera for the Museum, also with the help of free donations from private citizens. Many of the surviving sculptures of the medieval facade of the Cathedral were found scattered in the royal and private gardens.

In the 1930s, the room dedicated to Brunelleschi and the sculpture room of the ancient facade were inaugurated. When the museum reopened in 1948, after the Second World War, the sculptures representing prophets from Giotto's bell tower were placed in the Cantorie room, while the originals were replaced on site by copies. Step by step the Museum had to expand its spaces by incorporating other adjacent ones: in 1954, the hall of the ancient choirs and the octagonal chapel were inaugurated on a project by the architect Rodolfo Sabatini, destined to house the most precious reliquaries of Santa Maria del Fiore and of the Baptistery, which for this reason was equipped with an altar and consecrated by Archbishop Florit. Between 1965 and 1970 also the reliefs of the Bell Tower by Andrea Pisano and Luca della Robbia were transferred to the Museum and replaced on site by copies. A few years later, another masterpiece entered the collection: Donatello's Mary Magdalene, until then kept in the Baptistery, where it was seriously affected by the flood of 1966. In 1981 it was the turn of Michelangelo's Pietà Bandini which until then had been in the Cathedral.

In 1989 the offices and the Archive of the Opera were moved to via della Canonica and this made possible the expansion of the Museum, which was redesigned and rearranged by Luigi Zangheri and David Palterer and which experimented the reopening on the occasion of the 2000 Jubilee. The renovated Museum had 14 rooms.

In 2012, following long and complex restorations, such as the Altar and the Silver Cross of the Baptistery and the monumental Gates of Paradise by Lorenzo Ghiberti were also back to the Museum within the latest generation display cases.

Three years later, in 2015, the Museum underwent a new, significant expansion thanks to the acquisition of the spaces of the ancient Theater of the “Intrepidi”, and a powerful innovation of the staging curated by Mons.Timothy Verdon (current director of the Museum), in a completely new structure designed by the Guicciardini and Magni studio, with the participation of Adolfo Natalini. After the Vatican Museums, the Museo dell'Opera del Duomo now houses the most important collection of sacred art in Europe, as well as one of the most important collections of Renaissance sculpture in the world. It has almost eight hundred works, arranged along 28 rooms arranged on three floors according to a didactic and evocative logic that sees the support of many innovative multimedia tools. 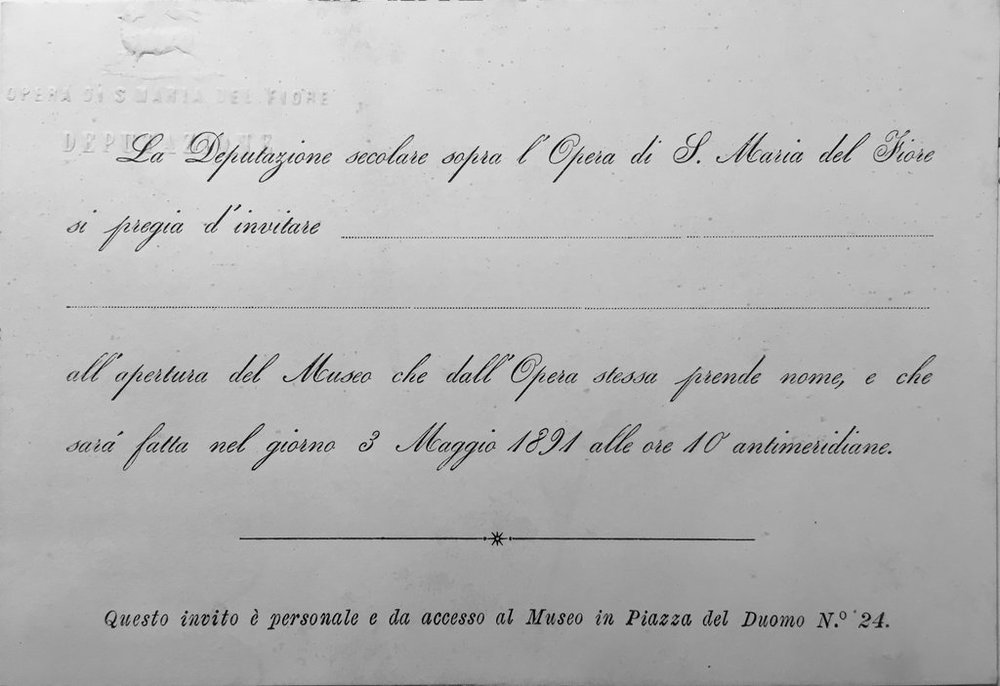