The Baptistery of San Giovanni, the oldest monumental building (11th-12th century), beautiful, loved and representative of the religious and civic identity of Florence, after the cleaning of its external marbles and roofing (2015) , sees today the first part of the restoration work on its internal walls completed

The Baptistery of San Giovanni, the oldest monumental building (11th-12th century), beautiful, loved and representative of the religious and civic identity of Florence, after the cleaning of its external marbles and roofing (2015) , sees today the first part of the restoration work on its internal walls completed: on Monday 25 January the dismantling of the scaffolding of the site just completed on four of its eight internal sides and the assembly of the remaining four has begun.

It is only the beginning of a greater work, as explained by the architect Samuele Caciagli, head of the Technical Area of ​​the Opera di Santa Maria del Fiore: "a large restoration site has been started for the internal facings, which consist of over 1100 square meters of marble surfaces, 200 square meters of mosaic decorations, over 100 square meters of gilding, treated in relation to the different degrees of complexity also through the application of specifically studied restoration methods ".

Once the eight walls have been completed, the 1039 square meters of mosaics of the Dome will then be subject to a subsequent restoration. Made in the thirteenth century by Venetian and Tuscan artists these mosaics represent the cradle of Florentine art.

Today, therefore, the visitor will be able to admire in their original splendor the four walls from north-east to west with their white and green marble inlays, the ancient-Roman reused columns and the medieval pilasters with their golden capitals, the mosaics fourteenth-century parietals depicting busts of prophets and patriarchs in the parapets of the women's galleries, series of cherubs in the friezes and saints in the parapets of the attic. On the occasion, two sepulchres (north-west wall), which are milestones in art history, also returned to life: the funeral monument to the antipope Giovanni XXIII (1422-28), an innovative Renaissance masterpiece by Donatello and Michelozzo and the tomb of Bishop Ranieri (1113 ca.), one of the oldest examples of Florentine Romanesque art.

The restoration proved to be very complex and involved both the architectural structure and the mosaic decoration. Begun at the end of 2017, the intervention was entrusted to the restorers of the Cellini Company and to Claudia Tedeschi under the direction of the Opera di Santa Maria del Fiore and with the supervision of the ABAP Superintendency for the metropolitan city of Florence and the provinces of Pistoia and Prato, as well as with the collaboration for diagnostic investigations of various Italian universities and various specialist laboratories.

During the works some discoveries were made: traces of gold leaf were found on one of the capitals of the women's galleries, which could suggest an original gilding of these elements which, together with the mosaics of the walls and the vault, would have increased the bright splendor of the interior.

It was then found that the technique of execution of the wall mosaics is absolutely original, indeed a real unicum: when between the first and second decade of the fourteenth century, after the colossal enterprise of the mosaics of the Dome, it was decided to extend them also to the walls, to superimpose the mosaics on the marble cladding to solve static problems of the monument (already known at the time), custom-made terracotta tiles were used, scratched and fixed to the marble of the walls with central iron pins beaten and welded with lead.

As the arch. Beatrice Agostini, designer and director of the restoration works of the Opera di Santa Maria del Fiore "a summary synopia was then made on the tiles and then the mosaic with the direct and daily method, identifiable and legible even today"; moreover: "even the mixture used to apply the mosaic tiles is an absolute peculiarity, not a normal mortar was used but more a mastic, and the degradation of this compound represented the most complex problems faced by this restoration".

With a look to the future and on the basis of historical data, Anna Maria Giusti, historical and artistic consultant for restoration, former director of the Opificio delle Pietre Dure concludes: "The experiences gained with the restorations carried out in the past decades on the mosaics of the women’s gallery and on a part of the sides of the Baptistery, still not affected by the current intervention, represented a significant yardstick and showed a decidedly less deterioration than that of the surfaces restored today ".

The Florentines waited for centuries to see their "beautiful San Giovanni" completed, with patience and thanks to the effort and professional skills of the technicians of the Opera di Santa Maria del Fiore and its external collaborators, in the coming years the Baptistery will return, after 700 years, to new life. Already starting now, we can return to enjoy a large portion. 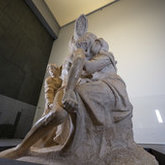 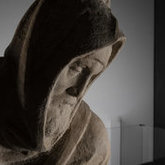