Michelangelo and the Cathedral of Florence: from David to the Pietà to the Dome

Not many people know that Michelangelo Buonarroti carved the David, the most famous and perfect statue of all time, for Florence Cathedral.

Not many people know that Michelangelo Buonarroti carved the David, the most famous and perfect statue of all time, for Florence Cathedral.

Since the mid-fifteenth century, a gigantic block of white marble was laying in the yard of the Opera di Santa Maria del Fiore. Agostino di Duccio, a sculptor pupil of Donatello, had bought it and had begun to sculpt it to depict a colossal King David to be placed on a external buttress of the Cathedral; but before he could complete his work he lost the commission and the large marble, only roughly sketched in order to depict a standing man, remained unfinished. Another great sculptor, Antonio Rossellino, also tried to complete the sculpture, but without success. This marble was now known as “the giant”… a fragile giant, because apparently the marble had been ruined by rainwater. Michelangelo, who was just 26 years old in 1501, fell in love with it and was allowed by the Opera to complete it. He carved it in one of the courtyards of the Opera, where today is the Cathedral Museum. What a wonder would be to admire the young genius at work on that colossus!

And his work was a true miracle: no one artist since the ancient times had carved such a large sculpture from a single block of marble; and also, this marble was fragile and Agostino di Duccio had partially clumsily carved it. Michelangelo was successful: in 1504 the David was completed. Such was the wonder aroused by this absolute masterpiece that it was decided that it deserved a more visible location. A committee of experts, made up of the greatest artists of that time, including Leonardo da Vinci, was assembled to decide where to place the David and the proceedings of that meeting are still preserved in the Opera Archive. It was finally decided to display it in front of Palazzo vecchio, where it remained until 1873, when it was moved to its current location: the Galleria dell’Accademia of Florence.

But there’s more: in 1503, when the David was almost completed and it was evident that it would be a masterpiece, the Opera entrusted Michelangelo with a very prestigious commission: they asked him to sculpt the statues of 12 apostles larger of the natural, to be placed in 12 niches in the pillars under the dome: imagine how wonderful it would have been this cycle of statues... The Opera had asked Michelangelo to sculpt one each year, but the artist, became famous, had made many commitments and in 1505 terminated the contract to left Florence for Rome. He left in Florence only the the first of his apostles: the unfinished Saint Matthew (more than 2 meters high!). In the following decades the commission was then entrusted to other teams of talented sculptors and today you can admire the 12 gigantic apostles in the Cathedral. Although unfinished, the Saint Matthew is a masterpiece: the figure of the elderly but powerful evangelist, with beard, tunic and the gospel gripped in his left hand, seems to be writhing to free himself from the rough marble that still imprisons part of him. The marble remained in the Opera del Duomo for three centuries, and only in 1874 was transferred to the Galleria dell’Accademia of Florence, that at this time was the "Michelangelo Museum", together with the David and the so-called Prisoners (four un-finished statues destinated to the Tomb of Pope Julius II). The Cathedral Museum was to be inaugurated a few years later, in 1891, but if it had already existed at that time, it certainly would not have let this work go away and today the Saint Matthew could be admired in one of its rooms.

Fortunately, however, the Opera still has an extraordinary masterpiece by Michelangelo: his second Pietà. The fate is curious: none of the statues that Michelangelo sculpted for the Cathedral are today preserved in the Opera monuments, while the Pietà, which he made in Rome, for his own tomb, destined to some Roman church, for really complex series of events, came to Florence ... (you can find its story in our 1st october post “12 things you may not know about Michelangelo’s Pietà in Florence Cathedral” that you can read it here).

I’m sure you already know that Ghiberti's Baptistery Door depictings Old Testament’s stories is now known with the name that Michelangelo himself gave it: "Gate of Paradise". And perhaps you also know that Michelangelo was also responsible for the interruption of the work on the dome drum gallery: Buonarroti defined the portion built by Baccio d'Agnolo a "cage for crickets" (he meant that the loggia was under-proportioned compared to the size of the dome and of its drum...) and that was enough to stop the work forever. In the Cathedral Museum is displayed a wooden model of the dome gallery that experts attribute to Michelangelo and which in fact has a more plastic and monumental character.

But Michelangelo owes the most to the cathedral of Florence is the Saint Peter's dome: without the example of Brunelleschi’s one Michelangelo could’t design that for the roman basilica. Saint Peter’s dome is higher, but Brunelleschi’s one is wider; the Roman dome has a circular drum while that of Florence is octagonal but to build his dome Michelangelo had to take up Brunelleschi's technical expedient of building a double dome, topped by a lantern. In fact, to design the Saint Peter’s dome the artist asked his Florentine relatives to send him to Rome studies and observations of Santa Maria del Fiore’s one.

And then, finally, we must not forget the importance had for Michelangelo studying the fifteenth-century statues that adorn both the Cathedral and Giotto’s Bell Tower, especially those by Donatello; his Moses for the Tomb of Pope Julius II in Saint Peter in Chains in Rome closely recalls Donatello's Saint John the evangelist, now in the Cathedral Museum, and the David itself seems partly inspired by Nanni di Banco's Isaiah. Who knows if Michelangelo thought back to the Judge Christ in the fourteenth century mosaics of the Florentine Baptistery when he frescoed the Universal Judgment in the Sistine Chapel: both reject the damned to hell with the left hand while with the right one welcome the blessed to heaven.

For many different reasons Michelangelo wanted to spend last decades of his life in Rome, far from Florence, but he always remained a Florentine in his heart and in his artistic genius and we can say that his relationship with the Florence Cathedral, which is the heart of Florence, it’s the best proof of it! 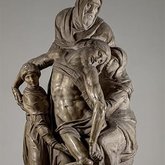 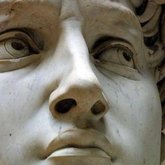 A giant on the move: Michelangelo's David - part 1 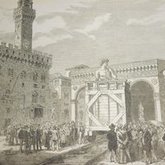