​In the previous post we left the works for the Dome’s Lantern in 1446 quite in deep troubles, with the death (on April 15th) of Lorenzo Ghiberti, the “site manager”.

In the previous post we left the works for the Dome’s Lantern in 1446 quite in deep troubles, with the death (on April 15th) of Filippo Brunelleschi, the “site manager”.

Francesco Paolo di Teodoro, professor of Architectural history at Politecnico di Torino, helped us to know what happened next.

It wasn't probably so easy to replace such a genius as Brunelleschi.

The “Palla” is made of welded copper sheets covered by a gilding gold leaf. Electricity is not a Renaissance discovery, copper is good electricity conductor, the “Palla” is a huge, involuntary lightning rod…

We already had Giorgio Vasari as a guest on our blog and his “Lives of the Most Excellent Painters, Sculptors, and Architects” is one of the first witnesses of the relationship between the Palla del Verrocchio and… lightnings.

The first reported episode dates to April 5th 1492 and, between 1492 and 1859 (when a lightning rod was built to protect the Lantern - the lightning rod was invented by Benjamin Franklin in 1749), the Palla del Verrocchio has been hit twenty seven times.

The worst blow was on January 27th, 1601. A lightning causes the fall of the Palla del Verrocchio.

But the Palla will be rebuilt and set again atop the Lantern on October 21st, 1602. A commemorative plaque in Piazza del Duomo still shows the place where the falling Palla hit the ground. 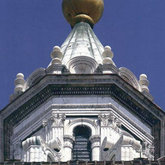